Founder and director of Foyster Media, Robyn Foyster talks about her journey creating her own multi-media and tech businesses. From making the shift as a journalist to rising the ranks as an award-winning editor, Robyn talks about her role as both editor and publisher of Australia’s biggest magazines to launching immersive AR apps including the Vivid Sydney app in 2018 and the challenges faced by a female entrepreneur in the male dominated tech sector.

FiitCollective founder and podcaster Tamara Johanna said “Robyn Foyster embodies what being an entrepreneur is all about”.

After starting out in journalism, Robyn went on to launch her own successful media company, Foyster Media and Foyster Consulting. This includes online publications such as Women Love Tech, The Carousel, Game Changers, and the positive news site Happy Ali which she jointly edits with Sooni Gander. More recently, she launched her consulting business InProfile where she helps brands build their online reputation.

In her interview with Females In Tech Show podcaster, Robyn shares her career journey from Newscorp Feature Writer and Columnist in Sydney and London, to Editor In Chief of The Australian Women’s Weekly and Group Publisher of Woman’s Day, Grazia and the Hearst titles in Australia which included  Cosmopolitan, Harper’s Bazaar and Madison.

Her journey as an entrepreneur has taught her many lessons, not least that start ups are not for the faint hearted.

The Shift to Digital Media

Robyn’s shift to digital media started when she noticed the potential of digital platforms becoming increasingly popular with consumers and advertisers, she wanted to make a change and seize this opportunity.

I got excited about the growth of digital media and the idea of running my own media business.”

In 2014, Robyn launched Foyster Media with TheCarousel.com. This website was a digital-only publication and heavily featured short-form content. It was one of the first websites to invest heavily in video content. Later Robyn created and launched GameChangers.com.au which profiles people in business including movers and shakers such as Nick Molner, the founder of Afterpay and Ita Buttrose.

An entrepreneur has to be across everything, and Robyn said she learned to work in all areas of her business and this included SEO, content management, building posts and developing social media campaigns for clients.

Increasingly, she became more interested in technology after she began editing Women Love Tech. She went on the board of an ASX listed tech company and was the Managing Director of AR Technologies, which she later owned after a management buyout in late 2018. At AR Technologies, she led the team that built the 2018 Vivid Sydney app before being founder and creator of the AR shopping app Sweep, which was the 2019 finalist in the Retail Innovation category for the Finder Awards.

Being a Tech Entrepreneur

Tamara and Robyn also talked about the tougher side of being an entrepreneur which is far from the glamorous picture often portrayed in the media. As an entrepreneur, it is essential to be able to manage the highs and lows and Robyn warned it can be a lonely road. This, she says, is why mentors are really important to help guide you and keep you focused.

Sweep was put into hibernation earlier this year after the spread of COVID led to lockdowns and a shut down of shopping areas.

Robyn is an expert in immersive media and explains why she believes it will change the way we engage with the world in the future. While still very much in its infancy, Robyn says it will shape and impact our lives in the future in ways we can’t even imagine.

“There is a seismic shift in the way we engage with content and products taking place, especially with the advancements in smart phone technology and the take up of 5G.

“Consumers can expect to be wowed by more immersive experiences and ways to interact with the augmented and real world,” Robyn adds. “These experiences will also improve and become more compelling as retailers and brands start to understand the power of immersive media.”

Tamara, whose organisation FIIT Collective is a global support network for females working in tech, or considering information technology as a career, said: “Robyn was a dream guest and had no shortage of great tips, and knowledge, to share. I’ve been a big fan of her websites, particularly Women Love Tech, so it took all my determination not to fangirl out!” 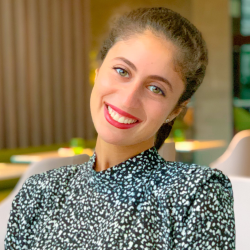