Every year Pirelli famously launches its latest calendar, created by one of the world’s best photographers. The 2017 edition is particularly impressive as it celebrates the natural beauty of women and femininity.

The new collection of photographs were shot by German photographer Peter Lindbergh, who’s often credited with the creation of the supermodel. In all, 14 internationally renowned actresses took part and were shot in black and white, wearing minimal makeup.

Lindbergh said: “My aim was to portray women in a different way and I did it by calling in actresses who’ve played an important role in my life, getting as close as possible to them to take my photos.

“As an artist, I feel I’m responsible for freeing women from the idea of eternal youth and perfection.

“The ideal of perfect beauty promoted by society is something that simply can’t be attained.”

Taking into account some gaps in its publication, the Pirelli Calendar has now reached its forty-fourth edition.

Lindbergh explains the underlying theme of the 2017 Pirelli Calendar: “In a time when women are represented in the media and everywhere else, as ambassadors of perfection and youth, I thought it was important to remind everyone that there is a different beauty, more real and truthful and not manipulated by commercial or any other interests, a beauty which speaks about individuality, courage to be yourself and your own private sensibility.”

The photos were taken between May and June of 2016 in five different locations: Berlin, Los Angeles, New York, London and the beach at Le Touquet in France. The result is a calendar consisting of 40 images – with portraits and environments – made not just in the studio, but also in a number of city corners and open-air sets.

However, the world of cinema is not the only thing that makes Lindbergh’s work so unique. He has always been known for his ability to bring into his pictures elements of the industrial world he grew up in.

His initial idea was to introduce aspects of technology and industry into the Calendar, so while he was working on it, he also took many photographs at the Pirelli industrial centre in Settimo Torinese, which is the Group’s most technologically advanced factory.

This experience led to a series of photographs of the world of automation and innovation, which turned out to be so evocative and powerful.

Lindbergh recently said in an interview published in Pirelli World magazine that “In the end we decided to keep the two series of shots separate and to use the ones in the factory for an independent project, rather than for the Calendar.”

What goes on behind the scenes, the shoots, the stories and the personalities of the 2017 Pirelli Calendar can be found on www.pirellicalendar.com. technology
Try On Your Makeup Before You Buy It With Pinterest’s AR Tech
Emeric Brard on July 12, 2022 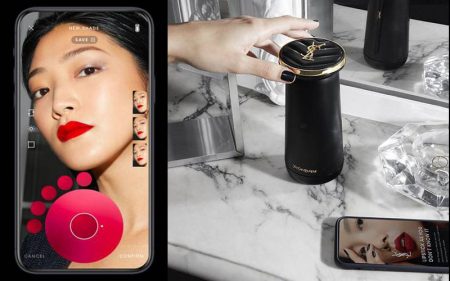