Top Gadgets We Use Every Day Inspired By Your Favourite Shows

Even just ten years ago, gadgets dreamed up by some of television’s finest imaginations seemed like they’d forever be science fiction.

Didn’t it sound so far off base that a robot would vacuum your house, that you could communicate via smartphone, or that you could wear Fitbits and GPS devices to track your health or get help in an emergency?

Technology has advanced leaps and bounds in the last few years, and many devices that were first seen in futuristic cartoons, TV shows, and movies are now a reality.

Here are some of the most useful gadgets from your favourite past shows that may also give you a hint of nostalgia.

How awesome was it when The Jetsons characters called each other up and it was like they were talking face-to-face? Most only dreamed video calls could be a reality and probably wished they existed as a kid when their best friends moved away. Fast-forward twenty-five years, and now Zoom, Facetime and What’s App all allow you to communicate via video chat with just a few button taps.

Also, no true fan can gloss over the Jetsons’ version of the PillCam. George would swallow a pill camera, and it performed a quick checkup to make sure all his organs were working properly. Nowadays, doctors use the same idea to perform endoscopies and colonoscopies.

Remember the 1982 film Blade Runner? It gave a glimpse into the year 2019 and showed digital billboards flashing ads for Coca Cola and Pan Am. At the time, this portrayal seemed dark and futuristic. Now, when you drive down the highway, you don’t give a second thought to the several digital billboards advertising their messages.

Blade Runner also introduced the idea of watching the news and getting updates on a tablet. The characters enjoy breakfast while watching the news on what looks exactly like today’s iPad. Now, it’s difficult to imagine a meal without your tablet nearby.

“I’m sorry, Dave. I’m afraid I can’t do that,” said Hal 9000, the robot from 2001: A Space Odyssey. Hal 9000 was truly a marvellous creation of science fiction. It could speak, read lips, interpret emotions, and play chess—and it came with speech and facial recognition software, among other talents.

While we may not have Hal 9000, and that’s probably a good thing considering its villainy, we certainly have easy access to Hal 9000’s friendlier cousin, the Amazon Echo’s Alexa.

Today, we can ask Alexa complicated questions and get answers immediately, including driving directions, products prices, and historical facts. Basically, anything you can dream up, you can ask your robotic personal assistant. They may not have the answer, but based on how much technology has advanced since the creation of Space Odyssey, there is no telling what the future holds.

It’s hard to forget the classic moment from The Simpsons when future Lisa is engaged and her fiancé has a smart watch. It almost makes you think those cartoonists took a visit into the future, especially since they also predicted Donald Trump as president.

Today, not only do we have smart watches for adults, but we also have fitness trackers like the Fitbit, Apple Watch, GPS trackers for pets and children, and wearable medical alert devices. Modern-day technology makes it easy to keep track of daily activities, keep an eye on loved ones, and get help with the push of a button.

Who saw the holodeck in Star Trek: The Next Generation and did not want to travel through time or space without leaving their own home? This room used holograms to simulate any time or place the user wanted to experience. In the show, the crew of the USS Enterprise used the holodeck for both recreational and training purposes. Can you say, “beach vacation every night”?

Today, Star Trek fans can have a holodeck experience with virtual reality devices like the Oculus Rift. Virtual reality now allows anyone the chance to explore the jungle, travel through space, or even test out their chances in a zombie apocalypse. Just put on the visor, grab your controllers, and set out on an adventure that feels like reality.

Do you remember life before the internet and smartphones? Which gadget can you not live without? What gadgets do you think will be more mainstream in the future? Maybe you’ll be able to raise a glass to a beam-me-up-Scotty transporter in the near future. Here’s hoping.

You can find Krystal on twitter @krogersnelson and read some of her other articles here: https://krystalrogersnelson.contently.com/ 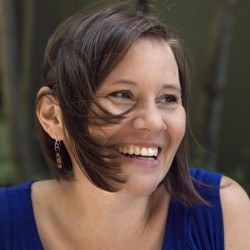 Krystal Rogers-Nelson is a freelance writer living in Salt Lake City, Utah in the U.S. She specializes in topics including tech, security, travel and parenting. With a passion for making technology accessible, she believes in using technology as a tool, not an appendage. When she’s not researching or writing, you can usually find her wrangling her toddler, streaming late night comedy shows, or spending time in nature.